How Instances Work & How to Decide on Additional Instances

Due to some regularly occuring questions concerning instances – what they actually represent and how you will be able to change their configuration – we decided to provide you a brief overview which you can use in conjunction with our Pricing Configurator to get a better idea about how you will be able to tailor YARPS to your specific needs.

1. What is an Instance, anyway?

In spite the term ‘Instance’ is a rather technical, generic one we decided to adopt it in our communication in order to allow a more detailed understanding of the modular, extendable nature of YARPS.

In the context of YARPS an instance is representing a container, similar to a physical room, in which you not only can store and structure entities, but also can define game settings and even redefine physical laws if necessary.

Phrased differently a YARPS Instance could also be called a world or a universe. One instance consists of everything related to one RPG setting you play. However, since RPG settings do exist in various scopes from limited regions to giant universes, they are not necessarily “worlds” in terms of a size definition but could be far smaller, or even consist of plenty of “worlds”. In YARPS, one RPG setting is placed in one instance, regardless of the scope.

2. When should you consider creating another Instance?

A set of rules you apply to your Universe usually is ubiquitous. Therefore whenever you consider changing these settings in a way that they would conflict with the existing ones you should consider a new instance in which you can define new game settings.

The main question about whether you need another instance or not is: Does my game take place in the same world and do I want to manage the entities the same way?

You need another instance, if you want to …

You don’t need another instance, if you want to …

3. What Is My Setup Going to Cost Then?

Based on our updated pricing model creating an instance is not going to cause you any costs in the first place. An instance comes with a free budget of 300 Instance Points which you can be used to already add some extensions to this instance.

For your understanding we are describing a couple common use cases here which you can mimic in our Pricing Configurator which is meant to represent the configuration of a single instance.

3.1. You just want to try out YARPS by working with a Single instance

This is what we consider an onboarding case for which we want to have you no costs caused in the first place. Because any instance you create comes with a free budget of Instance Points – meant to be spent for features – you can easily pick your setup and have a testrun for as long as you want.

Staying within the free budget of an instance is free of charge. In our Pricing Configurator this could look something like this:

For testing purposes you can keep the Encyclopedia Size, User Count and File Manager Quota to the minimum, which will cause you to have 150 IP left to spend for other YARPS features to test. You can spend the remaining points like this for instance: 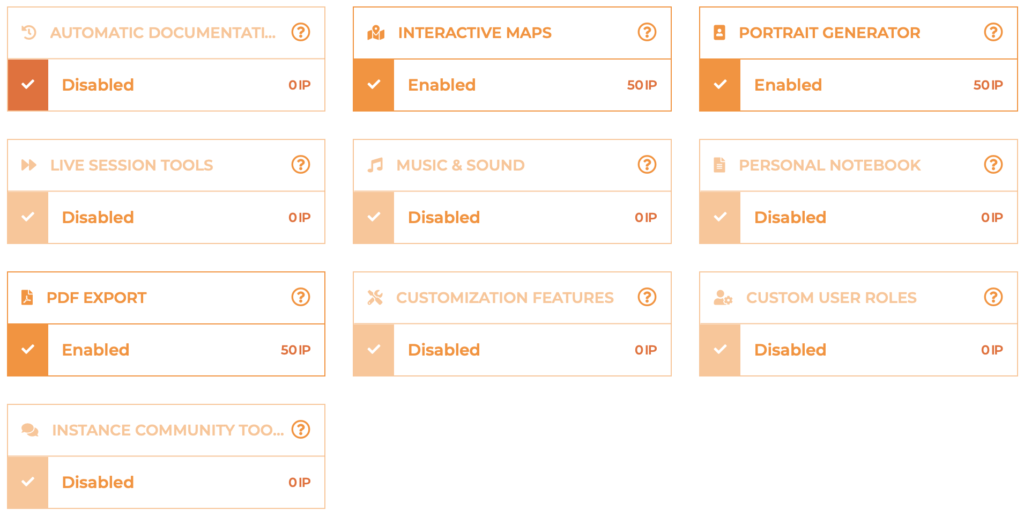 As pointed out earlier, the allocated 300 IPs are within the budget that comes for free with any instance you create. For this configuration the total, calculated in our Pricing Configurator, will testify that you won’t be charged at all for this setup.

3.2. You already have an instance created which is growing towards some limits

3.3. You are a GM who is leading multiple Groups through their Journeys

Having multiple instances running can be necessary if you need to handle different gaming setups. Yet you can tailor any instance to your requirements separately. So if you don’t require a specific feature for instance B you can deactivate it there to save some Instance Points and reduce monthly costs. Instance A might have this feature still available, provided that you kept it activated there.

This structure also applies to Entity and File Storage limits, which you can easily configure per instance.

3.4. You finished a Game session knowing that you will not continue during the next 6 Months

In this case you can put this instance to standby / pause by removing all features that are exceeding the instance’s free budget. The next month this instance will run in “free mode” and will not cause you any costs.

Provided that you earned a Lifetime Instance via Kickstarter you can remove this “Perk / Plan” from one instance and add it to another instance of yours. Yet, as soon as you know that you’ll be having another session the next month, you can re-enable all the required features again and have the instance back in perfect condition in no time.